In 1972 a new Mardi Gras Krewe was established to help promote the tradition of Mardi Gras in Acadiana and to encourage Lafayette’s young citizens to participate in Mardi Gras. The Krewe of Bonaparte’s first event was a summer cocktail party held Saturday, August 5, 1972 at Oakbourne Country Club. Some 150 people attended the event.

THE INAUGURAL BOARD MEMBERS

Although The Krewe of Bonaparte was established in 1972, it wasn’t until five years later in 1977, when its’ first Royals were selected.

Marquis and Royalty Court were not elected until 1983. The format remains the same today. 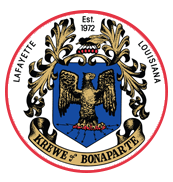